Smart cities get on their bikes 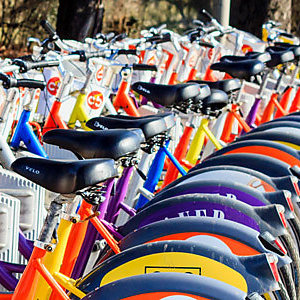 Many cities today are plagued by traffic congestion and, in densely populated urban areas, the fastest way of getting around is often on a bicycle. Philippe Legrand, Chair of ISO/TC 149/SC 1, Cycles and major sub-assemblies, tells us how standards can help our cities pedal their way back to urban bliss.

A humanistic, people-friendly city is first and foremost an accessible city, where mobility is possible for all. Sadly, big metropolises like New York City, London or Tokyo are often a living mayhem, with throngs of people, congested roads and a polluted atmosphere.

Traffic congestion represents a major economic problem because of the many working hours lost each day from sitting in traffic jams and soaring petrol costs. In Mexico City, for example, one of the cities worst afflicted by traffic congestion, the average speed of cars is 4 km/h during rush hour. In our fast-paced societies where every minute counts and time is money, the daily struggle to get through life is leaving people frazzled and exhausted… and in a very bad mood.

So what’s the solution? The good old bicycle! A growing number of cities around the world are eager to become bicycle cities, as part of a wider strategy to raise their green profile. A case in point: in Copenhagen, Denmark, for example, the majority of cyclists favour this means of transport to get to their destination quickly, saving the city 90 000 tonnes of CO2 emissions annually.

Cities of bicycles are people-oriented cities. Many modern towns around the world recognize that providing space for cycling creates efficient and attractive environments to live, with the benefits that this brings in terms of attractive streetscapes, economic use of land, simplicity of moving around, and healthy lifestyles.

Take the medium-sized city of Annecy, France, where 50 % of trips are within a 3 km radius. Over such short distances, biking is the fastest means of transport by miles, getting city dwellers across town in 15 minutes flat... and it provides an ideal source of exercise every day.

Far from the noise and pollution of motorized traffic, the bicycle brings countless benefits to our stressed-out societies, such as a healthier lifestyle, a pleasant leisure activity and a sustainable environment. Bikes are also affordable for, unlike cars, even the poorest segment of the population can generally afford one.

Cyclists are also flexible as they can quickly shift from being cyclists to being pedestrians. This creates the conditions for people to meet and greet each other around town as well as visit local shops, fostering a sense of community and boosting local trade.

Parking your two-wheeler is easy too. In Annecy, for instance, cyclists can park near their destination, often for free, thanks to over 3 500 bike locations provided – although such parking facilities are not possible in all cities.

But by far the biggest benefit is our health. Who has never felt those endorphins flowing after a good bike ride? Not only is it good physical exercise, simultaneously working the heart and the muscles, it is also a great way to regain a sense of well-being. Practised regularly, at low speed, cycling gradually improves lung capacity, tones muscle, and relieves stress. And after all this effort, you will sleep better, too!

Pedalling a little each day also reduces the risk of more serious maladies, the likes of cancer, diabetes or cardiovascular disease, and even Parkinson’s and Alzheimer’s. But how do we get cycling to be a mainstream and desirable mode of transport? And how do we turn our cities into places where riding a bicycle is just an extension of walking?

In Copenhagen, cyclists save the city 90 000 tonnes of CO2 emissions annually.

So far, I have only ever heard these questions partially answered. One of the notable obstacles to the development of urban cycling as an efficient mode of transport is undoubtedly the deep-seated belief that “a bike is not for transport, it’s a sport”. Big cycling competitions like the Tour de France or the Olympic Games have sealed the sporty image of cycling, which equates in most people’s minds to effort and fatigue.

Bicycle theft is also a major scourge that compromises the development of this mode of transport, discouraging regular cyclists to retool and deterring first-time buyers. In fact, a French survey by the scientific research institute IFRESI-CNRS showed that up to 25 % of cyclists were put off replacing their bike after theft, and those who did resorted to cheap second-hand bikes – a “grey” market fuelled in part by thieves.

Despite the obvious challenges, however, the global bicycle industry is expected to reach an estimated USD 65 billion by 2019, driven by the recent enthusiasm for recreational and fitness activity, growing traffic congestion and rising fuel prices. Japan is one of the countries enjoying the boom. In 2010, it sold just shy of 9.5 million bike units for a market estimated at 116.6 billion yen (EUR 1 billion). Similarly, the market for electric bicycles trending in North America and Western Europe as a valuable transit option has shot up 25 %.

The key to enabling high levels of cycling is having the right infrastructure, including cycle paths and bicycle parking, but also a number of communication campaigns to promote cycling, educate children and target groups who do not normally cycle. Such initiatives are important in building a bicycle culture in cities where it was once absent.

But the desire to move around a city on foot or by bicycle does not come by itself, and must be supported by a people-friendly urban environment that entices people to walk or cycle. Small wonder then that part of New York City’s “PlanNYC for a greener and greater New York” involves a general upgrading of the public environment, including a plan for a comprehensive cycle path network. Naturally, different cities need different strategies, but there are overarching principles that are valid all over the world.

Adequate bicycle parking is also decisive in helping people choose to cycle. Having a bike in a convenient but secure location is the best way to make people use it automatically, particularly for local journeys to shops and other amenities. So far, these are generally located in highly trafficked areas such as transfer points between different modes of transport (train, bus, underground and car parks), but cycle parks are also needed in residential houses and flats, workplaces, shops, schools, public facilities, and entertainment venues.

Cycle parks also raise issues of anti-theft protection. So it must be possible to lock the frame of the bike securely to an immovable object, namely a cycle parking stand. Proper city planning that considers cyclists and builds easy-access bike parks into construction projects from the inception can help to get people back in the saddle.

A number of cities worldwide have shown that increasing cycling infrastructure requires carefully selected policies and supporting measures. This is why, in its 2012 report to the French authorities, ISO/TC 149/SC 1 proposed to increase the modal share of cycling by 1 % a year to reach 10 % in 2020, by changing town planning rules, making cycle networks in and around cities safe and easy to navigate, and improving the quality of bicycles and cycling equipment.

So what does ISO have to do with bicycle cities? Quite a lot really. Bicycles should be safe, convenient, health-promoting vehicles. In recent years, however, inferior-quality cycles have caused shorter product life and a worrying number of accidents. The emphasis on user safety is therefore particularly strong.

Bicycle standards have come a long way since ISO published its first standard on bicycle safety – ISO 4210 – in the 1980s, followed a few years later by ISO 8098 on safety requirements for children’s bicycles. One of the aims of ISO/TC 149/SC 1, the committee that developed the standards, is to focus on safety considerations, specifically avoiding the components for assembled bicycles, which are covered in other standards.

Establishing safety standards is ISO’s contribution to the development of cycling as an efficient mode of transport for sport, leisure and tourism. As the Chair of ISO/TC 149/SC 1, my priority is to drive worldwide consensus to ensure these standards are really being used, and not left “sleeping” at the bottom of a drawer. On a technical level, I also have to keep step with the changing needs of consumers, authorities and the industry… considering the state of the art to make cyclists a permanent feature of our new city landscapes.

ISOfocus
Urban living
What does a “smart” city look like? To find out, read this issue which looks at some of the smart city trends and challenges.
Elizabeth Gasiorowski-Denis