As ISO Annual Meeting closes, collaboration stays open to all

It may take place every year, but the 2022 ISO Annual Meeting was the first of its kind. 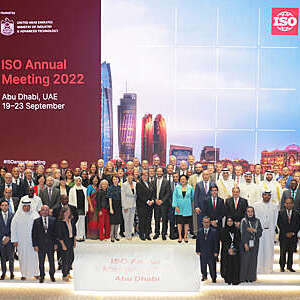 For this year's meeting in Abu Dhabi, the Organization shook things up with an open invitation to business, academia and the world of international development. The idea was to build new and effective networks of people who are committed to working together to fix our planet’s biggest challenges. The innovative approach set new highs in attendance and participation.

With interactive polls, live Q&A and commenting available, online participants benefitted from a state-of-the-art platform that also provided digital resources and speaker biographies on demand for an enriched participation. The immersive, collaborative experience on offer is just one reason why the 2022 ISO Annual Meeting exceeded expectations and broke records for participation, with more than 5 000 people joining in. But perhaps the biggest draw was the programme on offer which gave participants almost 50 different sessions to choose from. The event’s digital platform enabled people to catch up on sessions that they couldn’t join first time round offering both on-demand video and written transcripts.

The ISO Annual Meeting united a diverse group that comprised seasoned-standardizers as well as those curious to understand what standards can do for them. Fittingly, the theme that brought them all together was “collaborating for good”.
With International Standards supplying solutions to almost every challenge imaginable, it came as little surprise that collaboration covered topics from digital trust to global trade. But it was Climate that dominated the agenda in the light of growing recognition that urgent steps must be taken. That theme was prominent at previous meetings, notably the London Declaration of 2021, which this year moved from ambition to action.

Concretely, it was ISO’s upcoming guidance on ‘net zero’, and precisely what the term means, that took centre stage in many discussions. During the General Assembly part of the Annual Meeting, where ISO members vote on resolutions that determine the future procedures and priorities for their organization, members erupted into applause to show their backing for a new climate proposal. They committed to engage with governments, regulators and other major players in the climate space to promote ISO’s standards and guidelines on net zero as preliminary steps towards measurable progress.

Reiterating the pressing need for net zero guidance to bring clarity to climate commitments and objectives, ISO President Ulrika Francke said: “Net zero became a phrase and we have to put substance into that.” The first guidance ever developed at an international level in this area will be published next month by ISO having benefitted from record levels of participation in its development and drafting.

The climate commitment by ISO and the use of standards as a tool for regulators was a thread woven through conversations that spanned areas including water scarcity and the transition to clean energy. These were informed by leading international organizations and UN agencies including the OECD, the WTO, IRENA, the New Development Bank as well as the UNHCR, UNFCCC and UN regional representatives. Collaboration was further enriched by representatives of government representing ministries whose responsibilities encompass areas as diverse as energy, climate, trade, industry and foreign affairs.

The ISO Annual Meeting 2022 was a major step towards that ambition. It set a new bar for participation and engagement and gave attendees high expectations for the 2023 meeting which was announced to take place in Australia.
The head of Standards Australia Adrian O’Connell delivered a warm-hearted invitation promising “an inclusive, engaging and informative week”.

If you can’t wait until 2023, Standards Australia has created a video which confirms next year’s theme will be: ‘ISO meeting global needs’.

We’re looking forward to seeing you in Brisbane in 2023 – in-person or online!